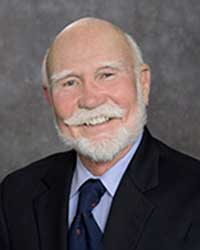 As an undergraduate at Harvard, Professor Campbell majored in English and Psychology.  He also played rugby and won the school’s middle-weight boxing championship.  Over the years his poetry has won numerous awards while being published nationally and abroad.

He left Washington, D.C. in 1976 to teach full time at California Western and write his first book, LAW OF SENTENCING.  This treatise, considered the national authority, has been cited six times by the U.S. Supreme Court and over 650 times by other courts and legal periodicals.

Professor Campbell currently sits on the board of directors for San Diego's Federal Defenders, Inc.  He was married for 45 volatile but steadfast years to the late, best-selling novelist Drusilla Campbell. Together they raised two sons plus numerous horses and dogs. His courtroom memoirs— a trilogy called TRIAL & ERROR: The Education of a Freedom Lawyer— have recently been published to the acclaim of  judges, lawyers, law students, and laypersons.