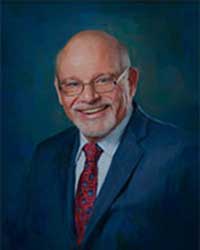 Professor Michal R. Belknap is a historian-turned lawyer, having written eight books and countless articles on American legal history and obtained his master’s and Ph.D. in the subject prior to law school. As interested as Belknap is in scholarship, he had an equally passionate devotion to teaching and preparing students with the skills to practice law. He enjoyed teaching Constitutional Law and Criminal Law and was the visionary creator of the Summer Enrichment Program, which he directed for two decades.