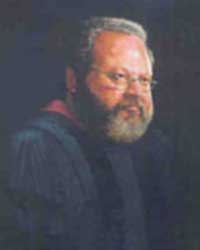 Robert K. Castetter was the founding Dean of California Western School of Law. He served as Dean from 1960 to 1980, when he was elected President of the law school by the Board of Trustees, a position in which he served until his retirement in 1985. He was also a tenured professor. Although sports were his first love, education and law were close seconds. He earned his B.A., magna cum laude, from Washington and Jefferson University. He received his LL.B. and J.D., with honors, from Salmon P. Chase College of Law and his LL.M. from Indiana University, where his dissertation topic was "Economic and Political Implications of Middle East Oil." He also received an LL.D. from Washington and Jefferson University, as well as an honorary degree for outstanding educational service. He was always very proud of the international scope of education at California Western. The courtyard at the 225 Cedar Street campus center is named for Dean Castetter and features a life-size bronze bust in his honor. The caption reads "Every day is a good day, but some days are better than others." The second floor of the law library is also named in his honor, and a generous alumni donation of $1.4 million established the Dean Emeritus and Professor Robert K. Castetter and Marjorie Castetter Endowment Fund.