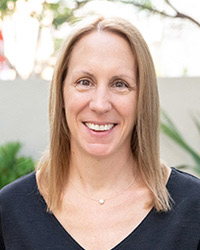 Hannah Brenner Johnson just completed service as the Vice Dean for Academic Affairs from 2019-2022 and is currently on sabbatical/research leave for the 2022-2023 academic year.

Professor Brenner Johnson’s research sits at the complex intersection of law and gender. She studies institutions and systems (i.e., colleges/universities, prisons, the legal profession and the courts) and the disparate power dynamics that often exist within.

Specifically, she studies the perpetration of sexual violence, and the related reporting, investigation, and adjudication, in closed and quasi-closed institutional settings like prisons, the military, immigration detention centers, and institutions of higher education. Her initial interest in researching these systems stems from her involvement as a co-principal investigator on a National Science Foundation grant that explored the reporting of sexual violence by women in prison.

Professor Brenner Johnson is an expert on issues of inequality in the legal profession. Her early work in this area considered, empirically, the ways in which the media portrays nominees to the United States Supreme Court, through a gendered lens. Her co-authored article that emerged from this research, “Rethinking Gender Equality in the Legal Profession's Pipeline to Power: A Study on Media Coverage of Supreme Court Nominees," was selected as a winner of the 2012 AALS New Voices in Gender paper competition. Her subsequent peer-reviewed essay, "Expanding the Pathways to Gender Equality in the Legal Profession," published in Legal Ethics, calls for innovative solutions to the rampant inequality that continues to plague women lawyers.

More recently she has been engaged in research surrounding the stories of women who were shortlisted, but never selected, to the United States Supreme Court. Her co-authored book on this subject, Shortlisted: Women in the Shadows of the Supreme Court, was first published by New York University Press in May 2020. The book was released in paperback in February 2022. The book has received high praise from scholars and practitioners alike. Named 2020 Exemplary Legal Writing by the Green Bag Almanac, the book was described by the Library Journal as “An excellent contribution...and essential for anyone who values diversity.”

Professor Brenner Johnson is also the co-author of the casebook, Gender, Power, Law & Leadership (West Academic 2019). The book has its origins in a seminar she designed over a decade ago and continues to teach at California Western.

Her work has been cited by the Delaware Supreme Court, in briefs before the United States Circuit Courts, by numerous scholars in law and other disciplines, as well as in popular media like CNN, Forbes, Huffington Post, Wall Street Journal, Ms. Magazine, Los Angeles Times, and the Detroit Free Press.

Professor Brenner Johnson teaches across the law school curriculum and her courses intersect with her research interests: Torts I, Gender, Power, Law & Leadership, and the Clinical Externship Seminar. She has previously taught undergraduate courses in both Political Science and Women’s Studies departments.

Before joining the faculty at California Western, Professor Brenner Johnson was on the faculty at Michigan State University College of Law, where she served as director of externship programs, and co-director of the Frank J. Kelley Institute of Ethics and the Legal Profession. At Michigan State, she was also a core faculty member of the Center for Gender in the Global Context and a member of the Research Consortium on Gender-Based Violence. Professor Brenner Johnson also served as the first executive director of the Center for Women in Law at the University of Texas School of Law.