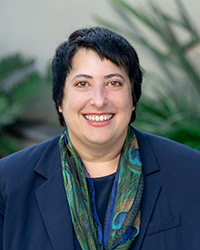 Nancy Marcus graduated from Case Western Reserve University with a JD in 1997 and subsequently earned her LL.M. and S.J.D. at the University of Wisconsin School of Law. She had a diverse and extensive legal career before joining the faculty of California Western School of Law.

Her previous academic experience has included teaching appellate practice at Case Western Reserve University School of Law, and serving as the founding constitutional law professor at Indiana Tech Law School. Her work as a private practitioner included three years’ work as a plaintiffs’ side toxic torts litigator at Waters, Kraus & Paul, where, as a law and motions attorney, she frequently faced formidable corporate defendants in court and was just one hearing short of a perfect record (28 for 29) in defeating summary judgment and adjudication motions in court hearings. In Ohio, she was an attorney for four years at the First Amendment law firm Berkman, Gordon, Murray & DeVan, where her practice also included family law, criminal defense, and business litigation.  Her first job out of law school was as a legal aid lawyer in the Appalachian foothills of Southeastern Ohio, where she represented those who could not otherwise afford legal services, in a broad array of areas including domestic violence cases, landlord-tenant cases, custody disputes, and negotiations with government agencies regarding access to critically needed government services. In addition to her work as a private practitioner and judicial law clerk, Professor Marcus’s public service work has also included extensive legislative and policy work, including as a Lambda Legal attorney, as State Public Policy Director for the National Abortion Federation, as State Affairs Research Counsel with the American Association of Justice, and as the Judicial Selection Project Dorot Law Fellow for the Alliance for Justice.

Professor Marcus has served in numerous leadership positions in her extensive volunteer work over the decades. For example, she is the co-founder of BiLaw (the first national association of bisexual lawyers and law students) and has served as Chair of the American Bar Association Civil Rights Litigation Section LGBT Rights Subcommittee, on the Board of the National Lesbian and Gay Law Foundation, and on the Board of Directors for a number of local and regional LGBTQ organizations and AIDS advisory committees.

Professor Marcus’s scholarship, particularly in the areas of tort law; racial justice and police reform; constitutional law developments in LGBTQ rights; and bisexual inclusion and erasure in LGBTQ-rights law, has been transformative and widely cited, including in a U.S. Commission on Civil Rights report; in federal and state court opinions; in a UN Shadow Report; in casebooks, treatises and other books; in American Jurisprudence articles; and in magazine articles; and reprinted as a book chapter.