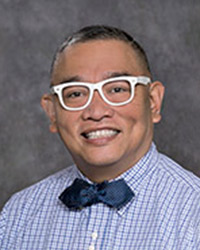 Tony Duldulao began working at California Western in July of 2009, and in January 2010 joined the Admissions team as Admissions Assistant. Duldulao is the first voice people hear when they call the office. He is also responsible for processing mail, applications, mailing out materials to prospective applicants, and answering questions from callers and visitors to the office.

Duldulao, who grew up in American Samoa, moved to San Diego in 1998. In American Samoa, he worked for Chicken of the Sea as the Inventory Manager and then later transferred to the corporate headquarters, in San Diego, where he was the Marketing Operations Manager. After nearly 10 years, Tony moved on to begin working at the corporate headquarters of Jack in the Box, in the Facilities Management department. Tony earned his B.A. from Saint Joseph’s University in Philadelphia, majoring in International Relations and Politics. He also received his MBA in International Business from Saint Joseph’s University.